AudioBook Version of “More Than Just A Voice” 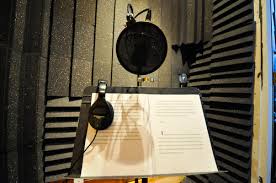 After narrating about 40 audiobook titles for other authors, I can’t tell you how much fun it is narrating my OWN title.

Audiobook narrator, producer, audio-mastering whiz, voice-actor, and friend Jeffrey Kafer once commented that if you’re not getting enough work narrating audiobooks, then write your own…and narrrate that!

That was not the motivation behind my writing “More Than Just A Voice, The REAL Secret to Voiceover Success”, but it has become a self-fulfilling prophecy.

In fact, I was surprised by the number of inquiries about an audiobook version that came back to me immediately upon release of the book in July.  I’m almost a little ashamed that I didn’t think to release the audiobook version first…as that is the choice many authors/publishers are making now.  I guess I was more of a traditionalist, and was anxious to actually hold the finished book in my hands.

Now that I’ve achieved that mark, though…I’m getting right to work on the audio version.  My casual conversational writing style is making it easy to narrate.  I write like I talk, a style that some say is hard to achieve in the printed word.  Many authors tend to the formal, and I tend to the conversational.

For a peak into the audiobook version of “More Than Just A Voice, The REAL Secret to Voiceover Success”, I’m posting for you below a SoundCloud player of one of the early chapters in the book:  “5 Reasons Why You Should NOT to Produce Your Own Voiceover Demo”