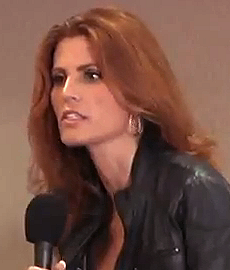 Among the many lessons I’ve learned in shedding “broadcast Dave” in the interest of “voice actor Dave”, is the one that Nancy Wolfson hammered into me early-on.  You know, Nancy Wolfson… the VO coach/Producer whose altar you really must worship at on your way to success (my opinion, but I’m biased — more on that in a minute).

Nancy picked up “the pronoun thing” in my delivery right away.  Apparently the Radio and TV announcers’ book of elocution demands you put extra emphasis on words like “you” and ‘yours” and “their” to the exclusion of  the point.  The point being the advertiser’s product, or at least the object (usually a noun, and usually an important noun) at the end of the sentence.

The reason for this misguided emphasis is lost in the mists of time before Edward R. Murrow probably, and it becomes 2nd nature after a while.

Look, I could go on, but Nancy can tell it so much better.  So take a couple of seconds to watch this video, OK?

There is no one in all VO-land who has dissected the motivational and psychological reasons behind ad copy like Wolfson.  Having completed her “Acting for Advertising” course (is it already?) two years ago, I can tell you her work is erudite, but more importantly it’s attainable, and doggone it…she’s right.

Every week for the next 12 weeks, I’ll be posting here on my blog another mini-lesson like this from Wolfson.  It’s part of a gradual roll-out to pique your interest in seeing the entire course, which comes at an insanely reasonable price if you ask me (but, again, I’m biased).

As you saw on the video…THAT tip is just one of 127 you get in the full video package “HOW TO SOUND REAL AND NAIL THE SALE”.  Like all her products, you can find it on her website.  For this particular video go to:  http://www.braintracksaudio.com/soundreal.

I had the nicest compliment from a VO peer the other day. He told me my blog was one of the few VO resources he felt 100% safe in referring people to.  That was HUGE…and I think you know I don’t endorse or support anything I haven’t tried or vetted first (part of my journalistic upbringing).

When Nancy asked if I’d be willing to post these videos here on my blog to help get the word out, I didn’t hesitate, because I believe in the value proposition she offers.  I know of very few voice actors who don’t share my opinion about her material.