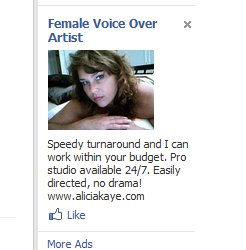 Lemme just throw this out there, ’cause I wonder about it every other time I open my FaceBook homepage.

You know, you can buy FB ads that are specifically targeted to certain audiences that may be willing to hire you…and since I have a lot of voice-over stuff on my FB page, the nice folks at Facebook send me other VO people’s FB ads in the right-hand column.  (You’d think they’d target it better than that, but I have no idea what FB’s ad algorithm is).

So, here is the VO ad I see fairly often pop-up on the right side of my page:

What do YOU think when you see this?  I see a come-hither look.  So….OK…it grabs the eye, and you want your ad to get attention, but I wonder if one-half of your potential might market think maybe that’s a little too much? (women)  Like I said, I dunno.  Maybe this works.

This FB ad campaign is obviously paid for by Alicia Kaye, and below is the pic you see of her on her own website.

I can’t really tell if the person in the first pic is the same person as the pic of Alicia Kaye from the website, and does it really matter?  Ads way before “Mad Men” used a little sex appeal to get attention…why should VO be any different?

Branding experts tend to move you towards choosing an image, logo, or slogan that reflects the real you, and if you want to garner VO work in the kind of sultry, smoky, seductive spots that you’re good at, then is there harm in running a seductive ad for VO?

I don’t know Alicia Kaye, and I would not judge, nor do I even begin to say it’s wrong or right.  It’s just….Alicia Kaye!

And besides, if you subscribe to the notion that all publicity is good publicity….then I just gave Alicia Kaye more publicity…so it works, right?