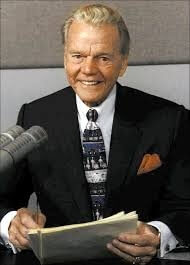 There was a reason they called him “The Prince of the Pregnant Pause”.

Some of you may not be familiar with the storied career of Paul Harvey. He was among the last of the great storytellers on radio, and people loved to make fun of his delivery style.  It was certainly uniquely his.

He would be talking along when he’d just stop and commit the cardinal sin of on-air programming: he would let the silence grab you…almost an uncomfortable pause, then pick up the narration again.

Although a contrivance, every last listener was hanging on — he had your undivided attention — for the first utterance that followed the silence.

A gap designed to make you listen.

I mention all this not to suggest you should pattern your delivery after Harvey’s, or that you should consider the pause a device to use in all your voice-overs. Certainly there is a place for it in some copy, but no one could ever do it like Paul Harvey, so don’t even try!

No, the reason I mention the pause, is because it’s a great tool for your life and your work.

Oddly, one of the things I grew to appreciate about a TV newscast deadline-oriented day is that no matter what I was doing; no matter how deeply I was involved in some task, I had to force myself to leave it to go to the studio to be on time for my mark at 5pm , 6pm, and 11pm.

Sometimes it was infuriating.  But then I grew to see the value of the pause.  Usually I would return to the task later with a fresh, renewed vigor and approach.  A frustrating phone call, or email, or even some tedious project would almost always be solved by THE PAUSE.

A pause also turned out to be the absolute best thing to do when steaming over a personal affront…a Facebook post that really needed to be roundly refuted…or an email meant to put someone in their place.

In such a case, a 24-hour pause was the right medicine to determine if that post or that email deserved to be sent.  Most often not.  Pride squelched.  Reputation saved.

A pause can be a deep breath and exhale…a count to 10…a trip to the fridge… a bicycle ride.

Last night as I was leaving the TV station following my final 11 o’clock news.  I paused and stood.  I just stood there in the darkness of the parking lot with my bags in hand.  I stood and listened to the hum of the traffic nearby.  I felt the cold of the night air. I dunno…20-30 seconds maybe.

And maybe 30 seconds cheats me of the proper reflection 37 years in broadcasting deserves… but it was good.  It was enough.

The pause obliged a life fulfilled.