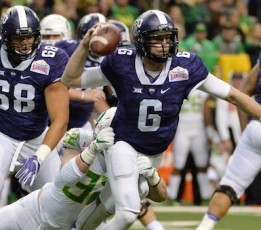 Be ready.  You just never know.

You never know when the opportunity arises for you to shine.  Admittedly, to the person toiling in what seems an interminable daily routine, that opportunity seems slow to come.

But isn’t that the definition of “luck”?…being imminently prepared when your chance comes?

I’m not big on sports metaphors, or analogies in general.  Because when you press the comparisons, often the parallels break down at some level…but such analogies CAN be useful for the purposes of general concepts.

There are 32 teams in the NFL.  That means there are only 32 starting quarterbacks.  Behind them are 32 back-up quarterbacks, and behind them, 32 third-string quarterbacks.  That means there are 64 highly-talented, accomplished athletes operating in relative obscurity waiting for their opportunity…hoping to get the nod to do something big.  When the starting quarterback gets injured…how ready will they be?  Seems like Brock Osweiler was ready.  His end-season performances landed the Denver Broncos in the playoffs when Hall-of-Fame prospect Peyton Manning became injured.

Trevone Boykin was a Heisman-trophy candidate.  As the QB for TCU’s Horned Frogs College Football team he was a triple-threat player.  He made things happen.  When he was arrested two days before the big Alamo Bowl showdown with Oregon, a relative unknown — Bram Kohlhausen — stepped in and led TCU to the largest come-from-behind victory in bowl history in 3 overtimes.

It doesn’t take a death or injury for a voice actor to step into an unexpected absence or opportunity.  But when you’re called, will you be ready?

This is why there is truly no such thing as an “overnight sensation” or a “sudden discovery”.  Josh Groban stepped in to substitute with Celine Dione when her practice partner got sick one day. She noticed. The rest is history.

Do the work.  Practice.  Get as good as the best.  Make yourself available.  Be known.  Knock on doors. Market yourself.  Get noticed as the go-to guy/gal when the chance comes.

Then you can take full advantage of “luck”.