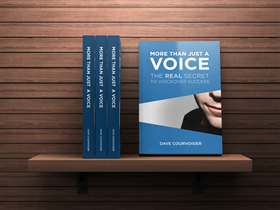 Back in the last century sometime (ahem), I just knew I’d eventually be the next Walter Cronkite or Peter Jennings.  I passionately lived that dream of TV News Journalism for many many years.  No regrets.

Then, I realized I had at least one more good thing left in me…it was voice-acting.  I’m still passionately living THAT dream, while playing out the remains of the last dream.  But…amazingly I’ve discovered that I apparently had MORE than “one good thing” left in me.  It’s writing.  Only…  IT found ME.

On those lonely early weeks in voice-acting, when the jobs were pretty far apart, and I was antsy to be doing something.  I turned to blogging.  I determined that I would be disciplined enough to do it at least 5 days-a-week, and that the content would be helpful, informative, and even sometimes newsworthy for voice over people.  For months, I didn’t even look to see if anyone was reading it.  Honest.  I saw the blog as a place where I was putting resourceful information that I could refer to, if no one else.

Then, I realized people WERE reading it. Lots of people.  They liked the conversational style, the personal perspective, the irreverent attitude, and the helpful information.

Now, mind you…I had been writing for many years.  Broadcast style.  Short, choppy sentences.  Brief, economical, frugal headline-style writing.  But blogging apparently brought out the guy who wanted to be a little more wordy, personable, and casual about his writing.

All those years of blogging taught me a ton.  It was like continuing education units in Voice-Acting!  The more research I did, the more I learned, the more I shared.  It also introduced me to many many people in the business who have become friends and mentors.   I was blessed.  In trying to “pay-it-forward” with the blog…I found rich rewards.

This sentiment is the momentum behind the book.  I was doing a final proof the other day of the chapters, and was amazed at some of the things I wrote.  Advice I need to take to heart all over again!  I found myself saying under my breath:  “There’s some really good stuff in here!”

I will be lucky to break even on the expense of this book.  I’ve already spent thousands, and I don’t care.  Maybe I could’ve done it for less, but I was a publishing newbie, and once I started, I knew I wasn’t gonna quit until I was published.

Now I stand on the cusp of the book’s release to market (Tues., 7-22-14)  and I hope you get a copy.  Even at this 11th hour, prices are still being determined for the print and the digital version…but royalties will be slender.  Like I said, I don’t plan to get rich on the release of this book.

Below is a video explaining a bit about how the book came to be, and what you can expect to find in it.

Have a great weekend!
CourVO