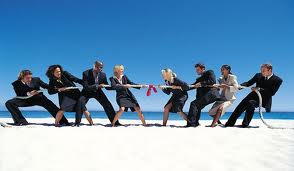 That’s one of the things I like about VO-land…it’s a pretty supportive, encouraging, and for the most part convivial.

As creatives, we have our spats and disagreements.  We all share voice work, but we don’t all share opinions.

Now it seems at least two factions in our business are winding up on opposite sides of a wonderful opportunity whose time is probably overdue.  That would be the creation, production, promotion and airing of a (likely) TV program seeking live auditions from available wannabe’s in voice overs.  ‘Sort of an “American Idol” or “So You Think You Can Dance” of voice overs.

It’s not a new idea, and many have discussed it freely.  Now two camps have openly trumpeted their intention to launch the program in reality.

The well-known, accomplished, and likable Network promotional VO Joe Cipriano, paired with the equally able and accomplished Randye Thomas are mounting a show early-titled: “America’s Next Voice”.  I chatted with Joe on FaceBook yesterday about this, and he indicated that they were not casting yet, but that the very public invitation to Ted Williams, widely seen and heard by many of us (at least on YouTube) is for real, and that Ted may be in LA as early as today (Sun 1-9-11) to meet.  This is the “America’s Next Voice” FaceBook Page.

But another group of also highly-regarded voice over professionals are also coming forward to proclaim their intention to do much the same…and they say they had it first.  Not only that, but the “other guys” may have stolen their idea!  In fact, this group, comprised of Erik Sheppard, Marc Cashman, Wally Wingert, and Sarah Natochenny (of the animated series Pokemon) likely has had their hand forced in this announcement due to the phenomena surrounding Ted Williams, and Joe/Randye’s subsequent public invitation to be on their show.

OOOOO…..KKKKKKK  Now what?  Are we in the midst of one of the most interesting times in voice over EVAR?

I approached Erik Sheppard, too, and asked if he would mind answering some pointed questions about the show, and the apparent competition between his show and the “other” show.

This could get interesting!

I wanted something different than most of the schlock that passes for reality television these days, something that would reflect the respect I have for the industry and those in it.  Yes, there will be one person left at the end of each season but the vision is to showcase the journey along the way and to give people more of an idea of what it takes to do what we do.  It was tough to cement a concept that wouldn’t be like making contestants crawl through mud for a date with an aging rock star or just be an “Idol” ripoff.  Respect is key but we still needed to show the drama and conflict inherent in our business.  I think we found quite a happy medium.

2) What’s the genesis of the idea?

The demand is there.  When I first started in this business and told people I was in voiceover I might as well have told them I was a unicorn trainer.  They had no idea what I meant.  Now when people ask what I do I tell them I’m a dentist unless I plan on a long conversation.  The public has such a huge interest in the industry, why not let them see what it is all about?  At the same time we get to help out aspiring actors and really help out one in particular, how great is that?

The original concept was mine.  After forging a friendship with Marc Cashman I decided to run it past him in the hopes of him coming aboard.  He loved the idea and was really instrumental in refining it and getting it to air.  Besides his energy, he is one of the most entertaining people I have ever met.  I have known and have worked with Sarah and Wally for a while now.  Sarah is incredibly talented and funny and gorgeous and just generally a great fit.  Wally is a legend in voiceover and kind of a madman so getting the chance to work with him is fantastic.  We all kind of fit a personality niche that seems to work together as a team and all have the same love and passion for the industry and other actors.  Other names are involved as well but we want to be able to surprise you guys with them.  We have them tied up in a van with NDAs taped over the windows until air.

4) What’s your timeline?  Who are your backers?

Our air date will be soon.  The wheels turn incredibly slow in the TV business but we hope to announce the first episode date soon.  Our sponsors are incredible and have been with us since just the concept phase.  The level of interest from these huge corporations has just been fantastic.

5) Were you and your partners aware that Joe Cip and Randye Thomas were ALSO preparing a similar offering?

6) Did you and your colleagues ever TALK to Joe and Randye?

7) You mentioned “there can only be one”…. (EDITOR’S NOTE, THIS WAS A COMMENT BY ERIK IN AN EMAIL RESPONSE TO ME WHEN I APPROACHED HIM ABOUT SOME ANSWERS TO QUESTIONS) Will this get competitive?  What will decide the winner?…who can get to production faster?…who has the best backing?

We are already in production.  Unfortunately for those that are looking for a brawl, it wont happen.  Incidentally, I was just reading a blog post where it was suggested we all compete on an island for the rights as some sort of meta show within a show.  I’m kind of sad that wont happen as I’m sure Joe and I in loincloths foraging for worms would have been a ratings bonanza.

8) Is “Behind the Mic” inspired by the Ted Williams phenomenon?

No, work on this began quite a long time ago (years).  The Ted story is amazing and inspiring but it takes an incredible amount of work to get a show to air and secure backers and production companies and networks and our celebrity guests, etc.  It’s just not possible to do this overnight.

9) Can the VO community help in any way?

I know they would if we asked.  That is kind of the point, how supportive we all are to each other.

10) Can Erik Sheppard handle anything more on his plate?